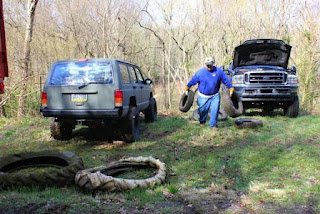 About 14 volunteers came out to clean up the Schuylkill River Trail Bartram Section, near Landingville in Schuylkill County  last Saturday, in honor of Earth Day. While their numbers were small, the task they performed was not. Among the items they pulled out of the area surrounding the trail were: 90 tires, a refrigerator and other appliances, scrap metal, and piles of plastic bottles and other debris.

The Schuylkill River Heritage Area organized the cleanup with the assistance Penn State Schuylkill, the Schuylkill Headwaters Association, and RETTEW Associates Inc.’s Schuylkill Haven office.  Support was provided by the Black Rock Motorsports Club, whose members used winches to haul out the tires , and CJ’s Tires, in Orwigsburg, which graciously volunteered to accept the tires from the site. Clean It Supply, based out of Jeffersonville, also assisted with the cleanup effort by donating 150 56-gallon trash bags, while the Pennsylvania Department of Transportation donated vests, work gloves and an additional 100 trash bags.

The trail cleanup was held in conjunction with the Schuylkill Scrub, a watershed-wide event that takes place over several weeks every spring. The Schuylkill Scrub is an effort of many partners who share the common goal of cleaning roads, streams and park to prevent trash from making its way into drinking water sources.

The Landingville section of the Schuylkill River Trail was in particular need of attention. It was an easy dump site before the trail was built and has been the focus of clean-ups in the past. To give an idea of the magnitude of the problem, during an earlier cleanup 120 tires were removed. Schuylkill River Heritage Area Trails Project Manager Robert Folwell said more tires and other debris remain in that area, and additional cleanups will be held in the future.

In addition to the Landingville cleanup, volunteers were also out on the Thun Section of the Schuylkill River Trail, near Squirrel Hollow Road in Berks County. The Schuylkill River Trailkeepers and the Berks Bicycle Club cut back branches and pruned overgrowth in that area, getting the trail ready for spring trail users. See photos of that cleanup in The Mercury.


Posted by Schuylkill River Heritage Area at 11:29 AM