A Ride on the Colebrookdale Railroad

The staff at the Schuylkill River Heritage Area recently spent a scenic fall morning riding the rails, taking a trip through stunning fall foliage on the Colebrookdale Railroad, from Boyertown to Pottstown.

This unique trip was organized by a member of our Board of Directors, Nathaniel Guest. Nathaniel has headed up an effort to establish a dedicated tourist railroad along  the route we rode yesterday morning, working through the Colebrook Railroad Preservation Trust. The trust hopes to have passenger trains running as early as next October, if they are able to secure funding to purchase a locomotive, that is.

We were invited to test out the 8.6 mile line because, as Nathaniel said "you just don't expect to see a rail line this scenic from Boyertown to Pottstown." And he was right. The tracks overlook some pretty spectacular views, with steep cliffs that drop down to flowing creeks. The bright orange,
red and yellow leaves were a bonus

The subtitle for the line is "The Secret Valley Line," which is appropriate, considering that it takes you through what is essentially a now hidden passageway that peeks at farms, back roads and wilderness.

We rode in small rail cars known as "speeders." They weren't very fast, but were so named because they replaced old pump cars that were much slower. We learned that the drivers of the speeders own their own cars and take excursions on them. Who knew? Our driver, Hank, came from York to transport us along the Colebrookdale Line in the speeder shown on the left. This was only one of several speeders that made the trip yesterday, since they are small vehicles holding only one to three passengers and a driver.

In the end though, this was more than just a scenic tour on a cute speeder car. It was a train ride through some impressive history, taking us over old railroad bridges, past numerous gristmills and former iron forges and furnaces, and through Pine Forge, the site of the first iron works in Pennsylvania.

You can learn more about the Colebrookdale Railroad: The Secret Valley Line and efforts to establish a tourist railroad by visiting: www.colebrookdalerailroad.com.

Posted by Schuylkill River Heritage Area at 10:33 AM 1 comment:

If you are like a lot of people, you probably think the Schuylkill River isn't all that clean. But the truth is, it's a lot cleaner than it used to be. There was a time--and it wasn't really all that long ago--when the river served as a dumping site for industrial waste and (disgustingly enough) untreated sewage. Just about anything anyone wanted to throw in it was game. Not only was the water filthy, but the channel was literally clogged with coal silt that washed into the river from mining operations.

A serious effort to save the river was undertaken in 1948, when the state of Pennsylvania authorized the Schuylkill Project, which dredged millions of tons of coal silt from the river. (You can read more about this in Chari Towne's book A River Again). Later, in the 1950s, sewer systems were built and laws were enacted that placed restrictions on what could be dumped in the water.

So now, raw sewage and chemicals aren't routinely being poured untreated into the river. That's good. But when it comes to polluting the Schuylkill, we're not out of the water yet, so to speak.

What are today's issues impacting the river? Stormwater run-off, acid mine drainage and agricultural contaminants.  Those are the three key areas targeted by the Schuylkill River Restoration Fund, which is administered by the Schuylkill River Heritage Area. The fund has been around since 2006, and since that time it has collected more than $2 million for projects that help keep potential pollutants out of the river. A total of 42 projects have been funded through this program, which gets money from Exelon Generation, the Philadelphia Water Dept. and Aqua PA..

Over 6,500 feet of stream banks have been protected from the impacts of stormwater runoff by various means such as planting riparian buffers and stabilizing the banks (see photo on right).  Manure containment systems that keep animal waste out of the Schuylkill and its tributaries have been constructed on numerous farms in Berks County; and projects at several abandoned Schuylkill County coal mines prevent toxic acid drainage from entering the river. 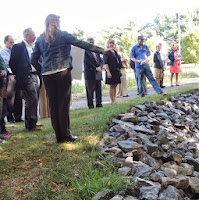 In September, we distributed over $350,000in Schuylkill River Restoration Fund Grants to10 projects that will help keep more pollutants out of the river. The photo on left shows visitors viewing a streambank restoration project at East Norriton Middle School during the recent grant announcement.  Check out our webpage to learn more about the projects funded and the grant program.


Posted by Schuylkill River Heritage Area at 11:52 AM 1 comment: