The 16th Annual Schuylkill River Sojourn was a terrific celebration of the Schuylkill River as Pennsylvania's 2014 River of the Year. It was a week filled with fun, friendship and learning and some really great presentations on various Schuylkill River related topics. Oh yeah, and paddling. Lots of paddling (112 miles, to be exact!). Overall, it was an amazing week. Here are some of the highlights.

Sojourners always have the option to check in at Schuylkill Haven Island Park and camp out there the evening before the event begins. This year, we wanted to do something a little special, so we had restored steam Locomotive 113 on site for people to climb aboard or just look at and learn more about. It was an impressive site, and the anthracite coal fired engine is an important piece of Schuylkill County's history.

Sojourners launched from Schuylkill Haven and paddled to Port Clinton, on a picture perfect Saturday. Watching over 100 kayaks launch on their 112-mile journey is always an impressive site.
Programs at lunch and evening stops focused on the Schuylkill River. At Saturday's lunch, Schuylkill Headwaters Assn. Director Bill Reichert discussed abandoned mine drainage cleanup efforts that have improved the river's headwaters.  After lunch, sojourners took an exhilarating paddle through "The Chutes." 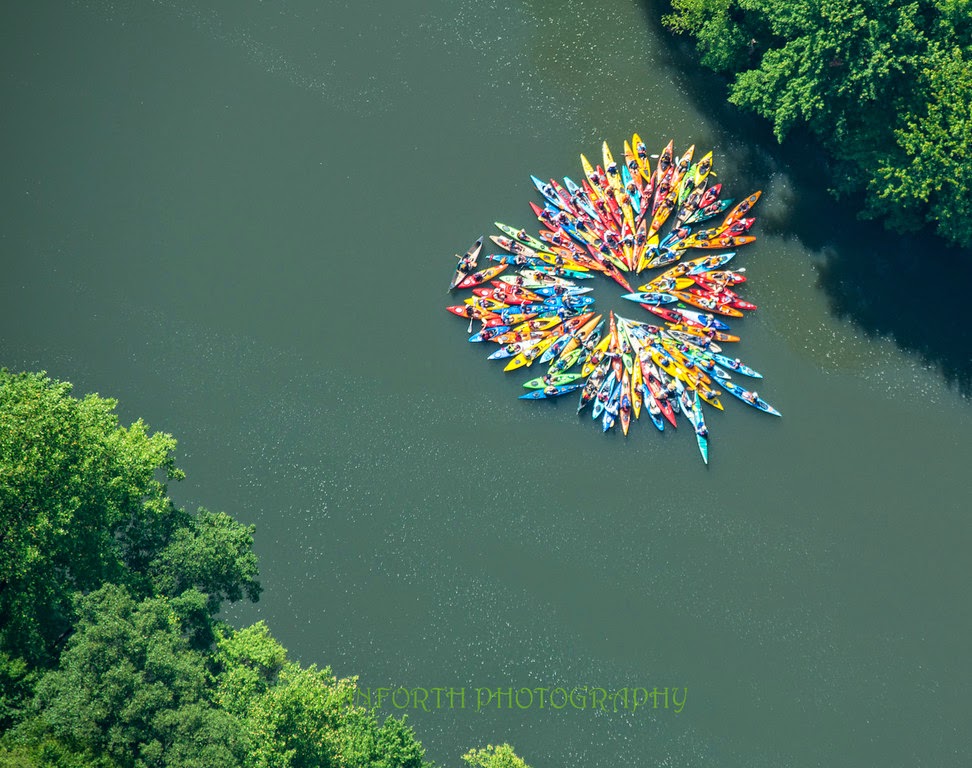 As they paddled from Port Clinton to Muhlenberg Township, sojourners had a rare opportunity to create a formation for an aerial photo (above). This stunning photograph was taken by our board member Ted Danforth and the formation was organized by our board President Carl Raring. It captures  the beauty of the river and the amazing, colorful effect created by 100 kayaks. At lunch, Haley Sheeler, long popular with sojourners, entertained with her original music, and we were fortunate to have Glenn Wenrich of the Berks County Heritage Center speak about the Schuylkill Canal. Sojourners then paddled to the beautiful Jim Dietrich Park, in Muhlenberg Twp., where they set up camp (below) and heard an informative presentation about paddling from  Sojourn Outfitter Doug Chapman, owner of Take it Outdoors Adventure Group.


Monday of the sojourn is always one of the most popular days of this seven day adventure. Two reasons for that: Kelly's Rapids, just outside of Reading, and Crazy Hat Day!. This year, sojourners also learned about the Berks Conservancy at lunch, and about the restoration of shad to the watershed during the evening program. As a bonus, Josh Tryninewski released 20,000 baby shad into Allegheny Creek at the start of his presentation. Yeah, they were pretty tiny ("two eyes and a wiggle," according to Josh.) 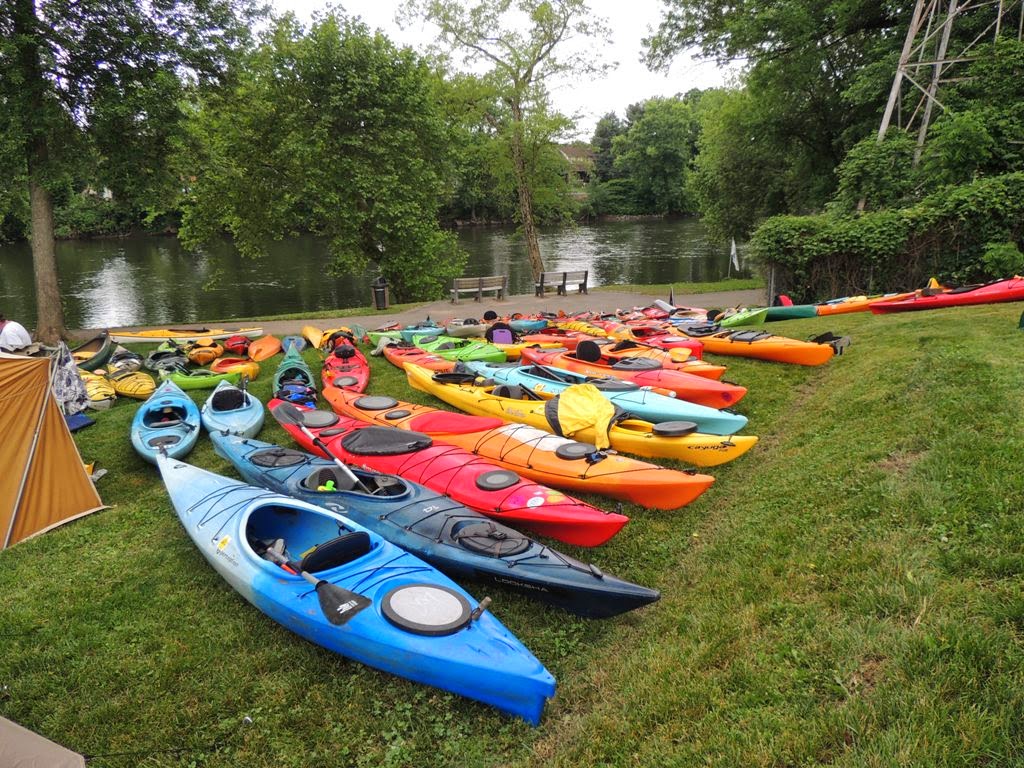 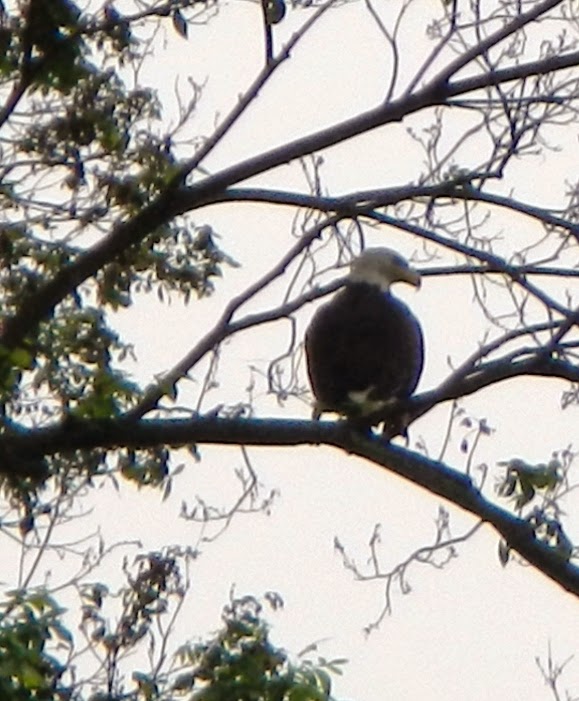 Sojourners paddled from Gibraltar to Pottstown. They lunched at Morlatton Village, where they heard a presentation
about the restoration of Fricks Lock Village, a former canal town. Afterward paddlers got back on the water and spotted a bald eagle as they traveled to Pottstown's Riverfront Park. There, Secretary of DCNR Ellen Ferretti read a proclamation recognizing the Schuylkill as PA's River of the Year. Other speakers included a representative from State Rep. Mark Painter's office, Chester County Commissioner Terrance Farrell, and a panel of watershed partners who spoke about their efforts to clean and protect the Schuylkill and its tributaries.

Sojourners capped off one of the longest paddling days (17.8 miles) with a

rare opportunity to lock through the restored Lock 60, the only operating lock remaining of the former Schuylkill Navigation System.  At lunch they were
welcomed at Royersford's Victory Park with a cake. From there, they were accompanied to Lock 60 by several Montgomery County officials including Commissioner Leslie Richards and Planning Director Jody Horton. The evening was highlighted by an enthusiastic presentation from the Norristown Dragon Boat Club.

The Sojourn stopped at Valley Forge National Historical Park for lunch, where Nancy Stoner of the EPA spoke briefly about a clarification about the Clean Water Act, and park representative Deirdre Gibson talked about the new pedestrian bridge being built over the river. A big hit with sojourners was the Norristown Boat Club which accompanied us for part of the trip and allowed some kayakers to take a turn in the Dragon Boat. In the evening, Sarah Clark Stuart of the Bicycle Coalition of Philadelphia discussed the network of trails in the Greater Philadelphia area, known as The Circuit.

The 16th Annual Schuylkill River Sojourn ended as always at Boathouse Row. Paddlers stopped for lunch at the historic Philadelphia Canoe Club before finishing their journey at Lloyd Hall. Overall, we had 64 people make the full trip, 100 kayaks (the most allowed) on the water every day except Thursday and Friday (86 & 95), and paddlers from 10 states and France attending. Many of our participants return year after year. They tell us they can't wait for the 17th Annual Schuylkill River Sojourn!

Posted by Schuylkill River Heritage Area at 1:02 PM No comments: