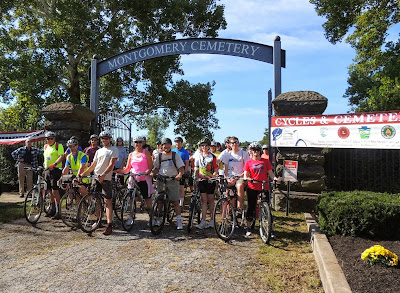 We have to admit that some people were skeptical when we told them about our Cycles & Cemeteries Ride. And we can understand why. After all, a bike ride that incorporates cemetery tours is pretty unusual. But we had a plan, and on Saturday, Sept. 21, when we finally put it into play, our event turned out to be a great success. Nearly 140 riders participated on a day that featured beautiful early fall weather, interesting Civil War-related tours and fun cycling along the Schuylkill River Trail. 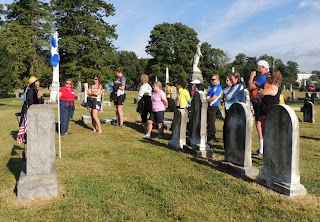 The event featured a 14-mile ride along the Schuylkill River Trail (28-miles for most participants who cycled round trip). The day began at Montgomery Cemetery, where, before the ride, attendees visited four stations  set up at grave sites of Civil War figures. Pictured on the right, a tour guide tells a group about Civil War nurses buried in the cemetery. Other stations included the graves of Gettysburg Generals Zook & Hancock and veterans of the Zook Grand Army of the Republic Post.


Following the tours, riders took off on their 14-mile pedal from Norristown to the Philadelphia neighborhood of East Falls, where they had lunch and tours of Laurel Hill Cemetery. After arriving at Laurel Hill, the cyclists were given maps to the sites where Civil War notables are buried. After lunch, a living history presentation was given by perhaps the most notable Civil War veteran buried there, Gen. George Meade, who lead the Union Army at Gettysburg. But cyclists found many other items of interest at Laurel Hill, as well, including beautiful monuments, stunning views of the Schuylkill River and the burial site of Harry Kalas. 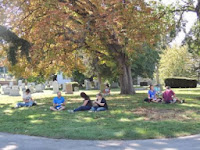 A catered lunch was served under a tent (above)...but some preferred to eat on the lawn (right) where they could enjoy the September weather and the cemetery's lovely scenery. After lunch, tours and programs continued, and riders headed back to Montgomery Cemetery. Those who chose not to ride were shuttled back to their cars. Overall it was a terrific day, and we heard many enthusiastic comments from participants. We are grateful to our volunteers, our partners Laurel Hill and Montgomery Cemeteries, Events Unlimited who managed the ride, and our sponsors: PA Dept. of Conservation and Natural Resources ~ National Park Service ~ Invata Intralogistics ~ Cast-Rite Metal Company ~ Translogistics, Inc. ~ 422 Commercial Realty ~ Montgomery County Community College ~ Mr. & Mrs. William Knight ~ Tri County Bicycles ~ B&G Glass ~ Brick House Restaurant ~

Posted by Schuylkill River Heritage Area at 12:10 PM No comments: