Highlights from the SRT Spreekend 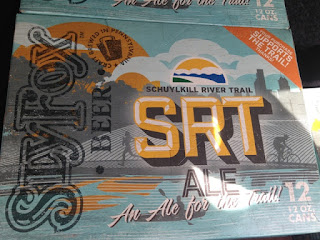 SRT Ale is back! And once again Sly Fox Brewery has generously agreed to donate a portion of the proceeds from the sale of this "Ale for the Trail" to the Schuylkill River Heritage Area to maintain, expand and improve the Schuylkill River Trail. Sly Fox helped us celebrate the beer's Earth Day release with a weekend of trail activities dubbed the SRT Spreekend. 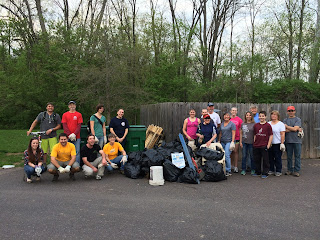 The Spreekend got underway on Friday April 22 with an evening trail cleanup in Riverfront Park in Pottstown. Over 20 volunteers turned out, collecting about 20 bags of litter, six tires and a collection of interesting trash that included a ceiling fan blade, vacuum part, broken bicycle pedal, rug and a tent. 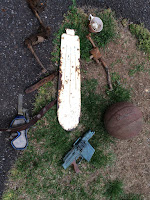 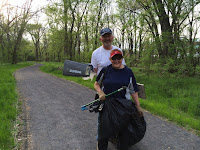 After the cleanup, volunteer and our staff helped Sly Fox celebrate the first tapping of SRT Ale. 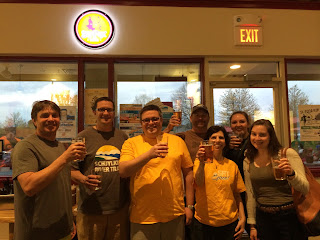 The day began early with a morning kayak launch as 40 paddlers left Riverfront Park to enjoy a day on the river and make their way to Lock 60 of the Schuylkill Canal in time for the Spreekend Festival which began at 3:00. 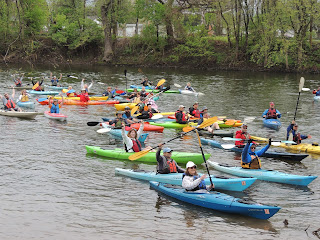 While they paddled, a 50K Spreekend Relay Race also got underway on the Schuylkill River Trail, beginning and ending at Schuylkill Canal Park. And the Schuylkill River Heritage Area led a group of 30 volunteers in a cleanup of another section of the trail in Douglassville. They collected 20 bags of trash and helped with a trail-widening project. 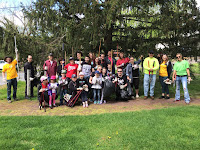 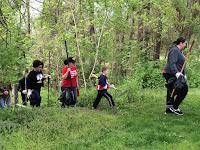 All volunteers were given Spreekend T-shirts and vouchers to try the new SRT Ale at the Spreekend Festival which featured Sly Fox Beer, Food and live music throughout the evening.Some people took advantage of the opportunity to camp out in the park and help with our final Spreekend cleanup Sunday morning. 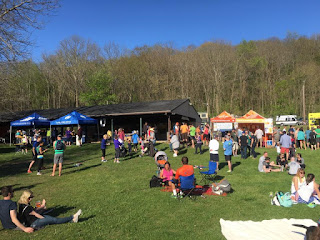 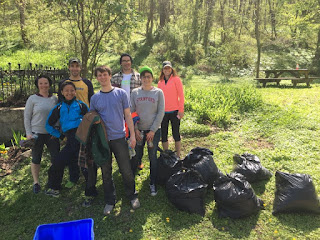 On Sunday, another 25 volunteers showed up for a cleanup at Lock 60. They cleared another 20 bags of trash from along the river and trail. Altogether, we had 66 volunteers at three cleanups remove over 60 bags of litter, in addition to some other large items--numerous tires, a child's plastic swimming pool, a lawn chair, tent, blanket and rug. They worked a combined total of 132 hours! And two other Spreekend cleanups were held in Phoenixville and Norristown in which another 80 volunteers participated.

Overall, the Spreekend was a great way to celebrate, clean and enjoy the trail and the Schuylkill River!


See more photos of the Spreekend!
Posted by Schuylkill River Heritage Area at 12:39 PM No comments:

Why Not Sign Up for the Schuylkill River Sojourn's Mid-week Days? 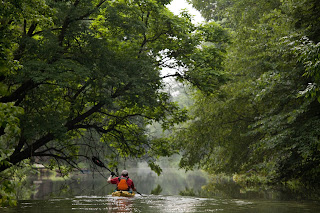 It's happened again. Only hours after we opened up registration for individual days on the annual Schuylkill River Sojourn the first three days of the seven-day guided canoe/kayak tour (June 4-10) are sold out. Sure, everybody wants to paddle on the weekend. But, to keep things safe we allow only about 100 boats per day. That means we wind up turning people away on Saturday, Sunday and Monday, while Tuesday through Friday fill up more slowly--or sometimes don't fill up at all.

If you are one of those who hesitated a bit too long to get on the sojourn's weekend days, don't despair! Here's a day-by-day guide to the sojourn's mid-week days. All have openings so you can sign up for one or all four! As always the sojourn will begin in Schuylkill Haven and end at Philadelphia's Boathouse Row with participants paddling 14-18 miles per day. The program theme celebrates the Centennial of the National Park Service.
Click here to register

Tuesday June 7 (13.9 miles: Gibraltar to Pottstown)
This is a great day for Sojourn newcomers!  It's an easy paddle featuring beautiful scenery with the opportunity to spot interesting wildlife. The lunch stop is at Historic Morlatton Village, one of our region's best kept historic secrets. There, we'll have a presentation about the region's fascinating iron history. And the evening stop, at Riverfront Park in Pottstown, includes arguably the best dinner on the trip, catered by Bause Catering. We're teaming up with Pottstown Borough this year for an entertaining evening featuring a live band followed by screenings from Pottstown's first film festival.

One of the major highlights of the week-long sojourn happens on this day. Sojourners end the day by "locking through" the restored Lock 60 on the former Schuylkill Canal (see photo on left).. But, there's also some nice scenery and an enjoyable lunch setting  at Victory Park, in Royersford, where the Borough officials welcome sojourners with a delicious cake.  In the evening, paddlers can camp out near the canal, eat spaghetti dinner at nearby St. Micheal's Pavilion, and watch a slideshow about the Philadelphia Flower Show's National Park Service displays. 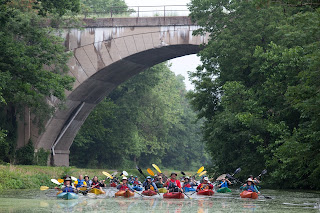 The river features a nice mix of scenery through this area. Paddlers begin the day in the canal and make their way into the river and through some wooded areas. The sojourn lunch will be at Valley Forge National Historic Park where a park ranger will give sojourners a rundown on how the park is celebrating the Centennial.  This stop always features an entertaining free raffle by Stony Creek Anglers. Later in the day sojourners encounter some interesting bridges and urban settings. At dinner, in West Conshohocken, they'll eat an amazing barbecue dinner served up by the Rib House. 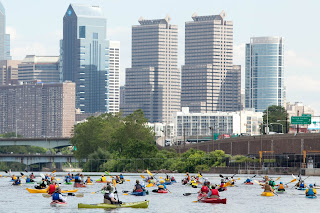 This may be the final day, but it's also one of the best days of the sojourn! Sojourners love having the opportunity to paddle with the Philadelphia skyline as their backdrop and alongside the iconic Boathouse Row. If you need another reason to paddle on Friday, lunch is at the historic Philadelphia Canoe Club, where you eat surrounded by some amazing antique boats. You'll also hear a brief presentation about the Washington Rochambeau National Historic Route.  The final takeout is Lloyd Hall on Boathouse Row.
Posted by Schuylkill River Heritage Area at 12:49 PM No comments: