There was a time when coal silt from mining operations flowed freely into the Schuylkill River. By the 1940s, coal waste, known as culm, laid 26 feet deep in some parts of the river bed.

Recently, author Chari Towne, spoke about the dire state of the Schuylkill at that time, and the extensive cleanup that saved the river in the mid-20th century. Towne, the author of A River Again, addressed a crowd of about 50 people at a book signing at the Schuylkill River Heritage Area offices on Dec. 19.

A River Again documents the environmental atrocities committed during the Industrial Revolution that left the river so polluted it was seriously threatened as a source of drinking water. During her lecture, Towne explained that the river was originally chosen as a public water source for Philadelphia because of its "waters of uncommon purity." Those waters were later sullied by the routine dumping of residential and industrial waste. Towne painted a grim picture of slaughterhouses, dye plants and coal mines--among many other industries--all pouring refuse into a river that over a million people relied on for drinking water.

But it was the coal culm that all but choked the river. Towne displayed several photos of the river clogged with culm, so full at one point that it actually flowed above its flood plain. Other photos showed mountains of culm piled near the river, all of which would wash into the waters. By 1945 an estimated 38 million tons of culm had accumulated in its channel.

But getting the river cleaned up was no easy task. It took government leaders with a strong will and a love of the environment to pass laws that led to the Schuylkill River Project. The first major government funded environmental cleanup of its kind, the Schuylkill River Project was a massive undertaking that dredged millions of tons of culm from the river bed. Towne's book delves into the politics and the laws that brought that about, and gives a close look at the fascinating process of dredging the river. The book sold out at the book signing but will be available in early January  from the Schuylkill River Heritage Area for $21.95. Call 484-945-0200 to reserve a copy. It also can be purchased or downloaded for free from the Delaware Riverkeeper Network.


Posted by Schuylkill River Heritage Area at 9:22 AM No comments: 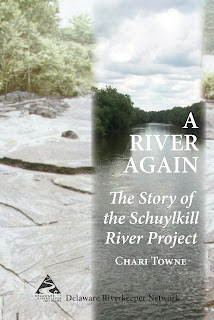 
In the mid-20th century, the Schuylkill River was one of the nation's dirtiest rivers. For over a century, it had been fouled by the routine dumping of industrial waste and raw sewage. But perhaps most damaging of all, was the coal waste, known as culm, that washed into the river as a result of coal processing operations. By 1945 an estimated 38 million tons of culm had accumulated in its channel.

Chari Towne's thoughtfully researched new book, A River Again, tells the story of the cleanup that saved the river from the brink of disaster, the Schuylkill River Project. Undertaken by the Commonwealth of Pennsylvania from 1945-51, it dredged millions of tons of coal culm from the river. It was also the first major, government-funded environmental cleanup of its kind.

The book includes photos of the dredging project and the sediment-filled river that help illustrate the enormity of the problem and the vast effort required to remove the coal culm.

Towne is a former Olympic rower who trained on the Schuylkill, and today works as the Schuylkill Watershed Specialist for the Delaware Riverkeeper Network. She is a graduate of the University of Wisconsin with a Bachelor of Arts degree in English and a Master of Science degree in Natural Resource Planning. The book was funded in part by a grant from the Pennsylvania Department of Conservation and Natural Resources administered through the Schuylkill River Heritage Area. Other funders include The Jerlyn Foundation and The William Penn Foundation.


Researching and writing A River Again took her about four years, but her interest in penning a book about the river’s cleanup goes back much farther.

“For more than 10 years I wanted to write this story, because it was something I realized most people didn’t know a lot about, or had misconceptions about,” said Towne.

Nevertheless, researching the book proved difficult. Many of the project records had been destroyed, and first person narratives from project workers were not easy to come by. Despite that, Towne managed to unearth enough documentation and former Schuylkill River Project workers to craft her 200-plus page book.

A River Again tells the story of how a series of environmentally harmful practices throughout the Industrial Revolution so defiled the river that its value as a source of drinking water was severely threatened. It introduces the politicians and environmental leaders who pushed for legislation to eliminate pollution and fought for funding to clean it.

Towne hopes readers come away with a greater respect for the Schuylkill and a thirst to learn more about its fascinating environmental history.

“People think the Schuylkill is so polluted today. It’s hard for them to put in context just how far the river has come. I’d like to see them regain that perspective,” Towne said.

The hardcover books will be available for $21.95 at the book signing, and can also be purchased directly from the Delaware Riverkeeper Network at www.delawareriverkeeper.org. It is also available as a free publication on that website, and can be downloaded here.


Posted by Schuylkill River Heritage Area at 9:41 AM No comments: