The 15th Annual Schuylkill River Sojourn featured a week of fun, friendship, learning and paddling, along with mostly great weather, and some really bad weather. Overall, it was a fantastic week. Here are some of the highlights.


Sojourners launched from Schuylkill Haven and paddled to Port Clinton, on a warm, beautiful Saturday morning. Opening ceremonies featured Sen. Dave Argall (pictured left) and Schuylkill Co. Commissioner Gary Hess, both of whom wished the sojourners well on their 112-mile journey down the Schuylkill.
Programs at lunch and evening stops focused on the Civil War. At Saturday's lunch, re-enactor Ron Long discussed the role played by Civil War chaplains.  Long (left) braved the 90-degree heat in his wool uniform. After lunch, sojourners took an exhilarating paddle through "The Chutes." 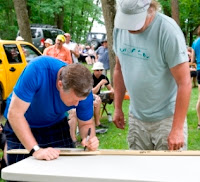 As they paddled from Port Clinton to Muhlenberg Township, sojourners were joined by US Congressman Charlie Dent (R-15). Dent, the first member of congress ever to participate in the Schuylkill River Sojourn, paddled to the lunch stop at Peter Yarnell Park, near Hamburg, where he addressed the sojourners. At left, Dent is seen signing the Sojourn paddle--an annual tradtion--while Jim Showalter, a veteran of all 15 sojourns, looks on.  Also at lunch, singer/songwriter Haley Sheeler, long popular with sojourners, entertained with her original music. Sojourners then paddled to the beautiful Jim Dietrich Park, in Muhlenberg Twp., where they set up camp (below) and watched a one-woman play "From Out the Fiery Furnace," about Hopewell Furnace during the Civil War. 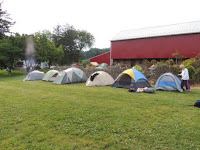 Monday's highlight is always Kelly's Rapids. Sojourners test their paddling skills through a bit of fast-moving wateroutside of Reading.
That thrill was followed by another highlight of this year's sojourn:  Gettysburg National Park Superintendent Bob Kirby (left) spoke at lunch bout the park's array of events that will commemorate the 150th anniversary of the Battle of Gettysburg this summer. On a less serious note, sojourners also deemed Monday Crazy Hat Day. 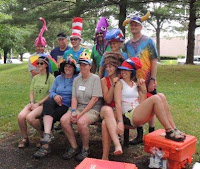 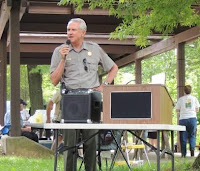 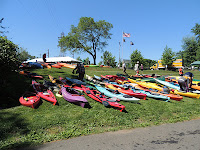 Sojourners paddled from Gibraltar to Pottstown on another picture perfect day. They lunched at Morlatton Village, where they heard a presentation on Lincoln's ties to the region by Schuylkill River Heritage Area Executive Director Kurt Zwikl. Afterward, paddlers got back on the water and traveled to Pottstown's Riverfront Park. There, they heard a lively presentation on Civil War buglers by Rich Pawling of History Alive. 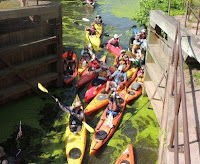 Sojourners capped off one of the longest paddling days (17.8 miles) with a rare opportunity to lock through the restored Lock 60, the only operating lock remaining of the former Schuylkill Navigation System.  At lunch they were welcomed at Royersford's Victory Park with a cake. From there, they were accompanied to Lock 60 by Montgomery County Commissioner Leslie Richards and Planning Director Jody Horton.

The Sojourn traveled along the Schuylkill Canal and back into the river, stopping at Valley Forge National Historical Park for water and lunching at Upper Merion Boathouse. This was "General's Day" of our Civil War programming theme, with a talk on by Bruce Stocking ( left) on Civil War Gen. W.S. Hancock at lunch and a living history performance by Andy Waskie on Gen. Meade at dinner.

The 15th Annual Schuylkill River Sojourn ended on a very rainy note, but nearly 90 paddlers braved the drenching rain and made their way from Conshohocken to Boathouse Row. Those included former PA Dept. of Natural Resources Deputy Sec. for Administration John Giordano and members of the Partnership for the Delaware Estuary, along with one of their sponsors Saucony Creek Brewery. They stopped for lunch at the Philadelphia Canoe Club before finishing their journey at Lloyd Hall.

Posted by Schuylkill River Heritage Area at 1:16 PM No comments: 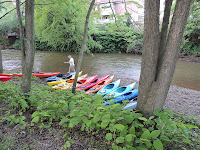 The 15th Annual Schuylkill River Sojourn got off to a great start on Saturday, with 112 people paddlers setting off from Schuylkill Haven Island Park. A total of 59 of them--a record number--will make the entire 112-mile, weeklong journey to Philadelphia. Here are some highlights from Day One of the sojourn:

On Friday night, sojourners check in at Schuylkill Haven Island Park, and many camp overnight. This Friday, a longtime sojourn tradition was broken: that is, for the past 10 year, it has always rained during the pre-sojourn checkin. But for the 15th Annual Sojourn, we had sunny skies.

﻿ The Sojourn includes entertainment and programming, with a different theme each year. This year's theme is ACivil War Odyssey. On Friday, the Breaker Boys entertained sojourners with Civil War Songs and stories. 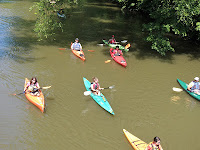 It was a beautiful day to be on the water. With temperatures in the 90s, paddling on the river was the perfect way to spend the day. 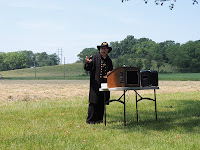 Civil War Chaplain re-enactor Ron Long braved the heat, donning his wool overcoat while speaking to the sojourners at lunch about the important role played by chaplains throughout the Civil War. 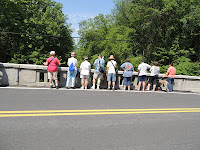 A crowd gathered in Landingville along a bridge to watch the colorful flottilla of sojourners make their way down the river. 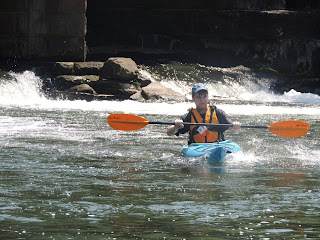 A popular spot on the sojourn, The Chutes, sends sojourners through fast moving water under an old railroad bridge. 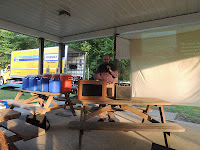 Sojourners ended their day in Port Clinton, where they were served a delicious spaghetti dinner cooked by the Port Clinton Fire House. Afterwards, author Jim Corrigan gave a fascinating lecture to a full house on The Battle of the Crater, about a group of coal miners who used their skills to tunnel under the enemy.
Posted by Schuylkill River Heritage Area at 6:06 AM No comments: