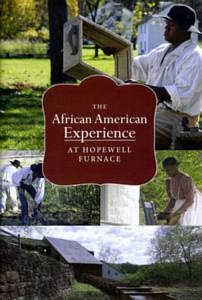 For more than a century, African Americans lived and worked at Hopewell Furnace. Maybe that's not surprising. But what is remarkable is that it appears they were treated as equals by their white co-workers at a time when slavery was still widely accepted in many parts of the country.

Overall, very little is known about the African Americans whose lives once revolved around the now historic furnace. Frances Delmar, the National Park Service chief of education and interpretation at Hopewell Furnace National Historic Site, set out to learn more about them. She pored through historic daybooks, ledgers and other records from what was once one of the most important iron furnaces in America.

The information she gathered is now the subject of The African American Experience at Hopewell Furnace, a slim, 24-page book that provides a glimpse into how these men and women lived. The book examines how they came to Hopewell, earned their wages, interacted with and were treated by other villagers.

In conducting her research, Delmar discovered a "startling lack of segregation."

"Here, workers and residents of Irish, German, English, Welsh and African backgrounds lived, worked, studied and worshiped together, apparently with little regard to ethnicity or race," Delmar wrote in the book.

On Tuesday, February 12, Delmar will speak about the book at the Schuylkill River Heritage Area offices on 140 College Drive in Pottstown. The book is attractively illustrated with photographs of re-enactors portraying 19th century African Americans on Hopewell's grounds. It sells for $5.95.

Interested in coming? Space is limited, so call 484-945-0200 or email ckott@schuylkillriver.org  to reserve a seat.
Posted by Schuylkill River Heritage Area at 11:08 AM 1 comment:

A Look Back on our 2012 Achievements

At the Schuylkill River Heritage Area, we are always working to fulfill our goals of using conservation, education, recreation, cultural and historic preservation and tourism as tools for community revitalization and economic development.  Here's a breakdown of our top 10 projects, programs and events for 2012.

1. Opened our River of Revolutions Interpretive Center. After more than six years of planning and design and many months of construction, we opened the doors to our new Interpretive Center in June and held a grand opening in November. Developed as a visitors center for the entire Schuylkill River region, and located in our Pottstown headquarters, the center has proven to have wide appeal. It features interactive exhibits and colorful, engaging displays about  river history (trust me it's fascinating!), recreational opportunities, historic sites, environmental awareness and more.

2. Organized the Rails and River Towns Ride. The inaugural ride in our three-year Schuylkill River Trail Bike Tour Series was a tremendous success, attracting over 100 cyclists who participated in a unique mix of biking and history. It included a ride along the trail from Pottstown to Birdsboro, a brief presentation on railroad history and optional walking tours of two historic villages.

3. Carried out the 14th Annual Schuylkill River Sojourn. A total of 230 paddlers from 5 states and Canada took the journey from Schuylkill Haven to Philadelphia in June. A night of heavy rain caused serious flooding, forcing the cancellation of paddling the first day. Despite that misfortune, the rest of the trip went without a hitch, and the camaraderie seemed especially strong among the sojourners, who always manage to build lasting bonds on and off the water. 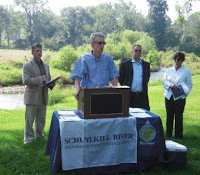 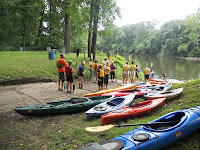 5. Pedaled and Paddled. We've learned that people love our round-trip Pedal and Paddle biking/kayaking adventures. Introduced in 2011 they proved so popular that we decided to hold one a month from June through September in 2012. Over the course of the summer, we took 60 people on a 4.5 mile ride along the Schuylkill River Trail in Pottstown, a tour of Historic Morlatton Village and a return trip via kayak.

6. Held our 9th Annual Art Show.  The juried Scenes of the Schuylkill River Heritage Area art show once again served as a showcase for regional talent that highlighted the beauty of the river valley. The show featured 76 original works, and hung in the Montgomery County Community College West Campus Gallery from Aug. 29 to Oct. 19. 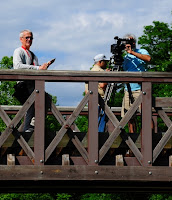 7. Received Recognition on National TV. Two films about the Schuylkill River Heritage Area were produced by American Milestones as part of its short-form documentary series and both appeared on national commercial TV stations in November. A 6-minute documentary will now appear throughout the year on public TV stations, so keep an eye out for that!

8. Hosted a Book Signing for A River Again. In December, a standing-room only crowd turned out to hear author Chari Towne's lecture on her new book, A River Again, about the mid-20th century cleanup of the Schuylkill River.  The book was well-received and all that were in stock sold out during the book signing that followed the lecture. We plan to host additional lectures and book signings in 2013, including one on Feb. 12th for The African American Experience at Hopewell Furnace.

9. Continued our work on the Schuylkill River Trail. Working with partners to expand, maintain and improve the Schuylkill River Trail is always a big part of what we do. For 2013 improvements and maintenance projects have been ongoing. We also reprinted and distributed our very popular full-color, accordion-style maps and continued to grow our Sponsor-a-Trail and Adopt-a-Trail programs in Berks and Schuylkill Counties where we operate and maintain 28 miles of the trail.

10. Planned for 2013. Our 15th Annual Schuylkill River Sojourn will launch this spring. Our 10th Annual Scenes of the Schuylkill Art Show will open in the fall. And in September our 2nd Schuylkill River Trail Rails and River Towns Bike Tour, named Cycles and Cemeteries, will take cyclists along the trail to two historic cemeteries where Civil War Generals are buried. We're looking forward to a great year ahead!
Posted by Schuylkill River Heritage Area at 9:21 AM No comments: