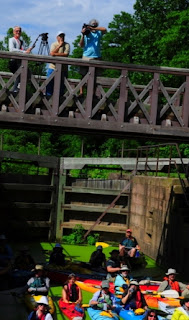 Last June, a film crew arrived at the Schuylkill River Heritage Area headquarters in Pottstown and got their cameras rolling. They spent over eight hours shooting video. First, director of photography Chris Mendes (seen with camera on left and below) climbed into a canoe and captured some great footage of the nearly 100 paddlers in the Schuylkill River Sojourn as they launched into their 5th day on the river. After that, the crew jumped in their cars and headed to Royersford where they set up cameras on a bridge and caught the Sojourners passing through. Later, they filmed cyclists making their along the Schuylkill River Trail. They ended their visit at  historic Lock 60 of the Schuylkill Canal, as the Sojourners "locked through." In between, they taped interviews and took video of wildlife and river scenery.
The crew was hired by American Milestones, a production company that specializes in educational short-form documentaries. The film they shot that day was edited into a short (1-minute) video "commercial" about the heritage area that will air on Fox Business Network on November 24 and 25. It was also made into a six-minute documentary that has been distributed to public TV stations nationwide and, beginning November 19, will be broadcast at the beginning and end of regularly scheduled programming. 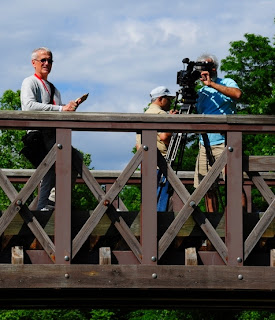