About 110 cyclists participated in the Schuylkill River Heritage Area's first organized bike event on September 22, and by all accounts it was a fun and interesting day. The Rails and River Towns Ride took place on a beautiful fall morning along the Schuylkill River Trail's Pottstown to Birdsboro section (also known as the Thun Trail).


The majority of riders—about 60—cycled 18 miles round trip to Birdsboro and back, and took a guided walking tour through some of Birdsboro's oldest streets, learning about its impressive iron making history.

The event was the first in the Schuylkill River Trail BikeTour Series, which will feature three organized rides over three years, each incorporating visits to historic sites and rides along the trail.

“We could not have asked for a better day for our first event,” said Kurt Zwikl, executive director of the Schuylkill River Heritage Area, which organized the event. “People enjoyed the ride and the tours, and they learned some interesting facts about local history.”

Before the ride began, cyclists gathered for a short presentation (photo on left) on the Pennsylvania Railroad, upon whose right of way a portion of the trail is now built. "I'm sure as we cycle here today we will all hear the whistles of trains from days gone by," said presenter Bob Thomas, who spoke of a time when trains, not bikes, would have made the trip from Pottstown to Birdsboro along the very route the cyclists would take.
Following the presentation,  participants made their way to Douglassville, for a tour of Morlatton Village, or to Birdsboro. Ride options ranged from 9 to 20 miles. More than two dozen volunteers helped the ride go smoothly, assisting with everything from doling out snacks to assisting at road crossings. Tri County Bicycles owner John DiRenzo provided free bike safety checks at the start and ride support throughout the day. 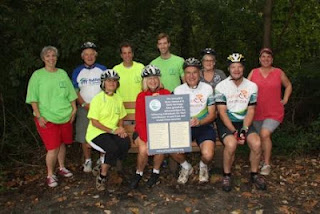 During the ride, four new benches along the trail were dedicated. Those benches were donated by Richard and Peggy Whittaker (seen holding the sign at left). The Whittaker's are avid cyclists who ride the trail regularly. They gathered donations for the benches last year, when Richard turned 70, asking for funds in lieu of gifts. The sign lists the donors who generously provided money for the benches.

Next fall, the Schuylkill River Heritage Area plans to hold the second ride in the Schuylkill River Trail Bike Tour Series. That ride, called Cycles and Cemeteries, will take place along the Norristown to Philadelphia section of the trail, and will incorporate visits to two historic cemeteries where Civil War generals are buried.

Posted by Schuylkill River Heritage Area at 12:09 PM No comments:

Come See Our Scenes of the Schuylkill Art Show

This is the ninth year the Schuylkill River Heritage Area has held it's Scenes of the Schuylkill art show  to celebrate the beauty of the river region. You can view the show at Montgomery County Community College West Campus Gallery, in Pottstown, until October 19. In case you think all you'll find there are a bunch of pictures of the river, think again. The artists who submit their work are drawing from a diverse set of subjects, seeking to capture the spirit and beauty of the five-county region. This year's 76 pieces include rural landscapes, Philadelphia scenes, woodlands, historic sites, stone barns, gardens and waterways. The mediums and styles are equally wide-ranging, so that one can visit the exhibit multiple times and always discover something that hadn't been noticed before. 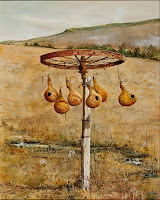 This year's show was judged by Ross Mitchell, executive director of The Violette De Mazia Foundation. Selected as Best of Show was artist Cathy Grygiel's pastel, Dawn at Valley Forge, shown above left. Second place went to Jonathan Bond, for his oil on wood panel, Carousel (right). Additional images from the exhibit can be viewed here. But the best way to experience this show is to visit the MCCC West Campus Gallery, located at 16 W. High St. in Pottstown.

Posted by Schuylkill River Heritage Area at 7:30 AM No comments: 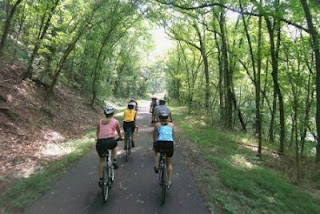 We have an exciting event coming up in a little over a week: the Rails and River Towns Bike Ride. While we have long been active in building and promoting the Schuylkill River Trail, this is our first organized bike ride along the trail. It won't be the last. We have a series of rides planned over three years that will incorporate different parts of the trail and incorporate different historic sites.

The Rails and River Towns Ride will take place on Saturday Sept. 22. You can read about the details here.  The day will start with a presentation on the Pennsylvania Railroad, upon whose right of way the trail is partly built. Cyclists will travel 9 miles (18 miles round trip) from Pottstown's Riverfront Park to the town of Birdsboro, home to the largest producer of iron during the Revolutionary War. In Birdsboro, they can opt to take a guided walking tour to learn about the history of this former iron and steel town.. The tour features 10 historic sites, including the 1853 former St. Micheal's Episcopal Church (pictured below) that was renovated in 1854 under the supervision of noted Philadelphia architect Frank Furness.


Those wishing for a shorter ride can travel along the trail 4.5 miles to Historic Morlatton Village, in Douglassville. There, tour guides will offer information about the site's four 18th C. buildings, including the Mouns Jones House--Berks County's oldest home (pictured right). Participants who just want to ride can opt out of the walking tours and take a loop trail through Union Township's Recreation Area.

This is a unique event that combines lessons in local history with a bike ride along a beautiful section of the Schuylkill River Trail. There's still time to register! Click here for online registration.
Posted by Schuylkill River Heritage Area at 12:08 PM No comments: