Grand Opening of The River of Revolutions Interpretive Center

On Monday we held the grand opening for our River of Revolutions Interpretive Center. Since the center was completed over the summer, several groups have gone through it before, but we've never had such a large number of people visiting it at one time. So we put everything to the test. The result? All good. The food, the speakers and, most importantly, the reactions to the displays were great. Below are some photos from the event which took place at our headquarters located at 140 College Drive, Pottstown, PA.

The project was led by Steel City Displays, of Malvern, and the center was designed by Miller Designworks of Phoenixville. On the left, designer Scott Sharadin signs in.  On the right, designer Lee Fitler looks through an eyepiece that allows visitors to see like a hawk. 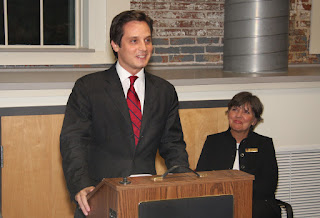 PA Dept. of Conservation and Natural Resources Deputy Secretary John Giordano spoke at the event. Looking on is National Park Service Liaison to the Heritage Area board, Barbara Pollarine.

People spent a lot of time enjoying the displays... 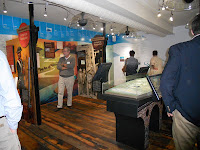 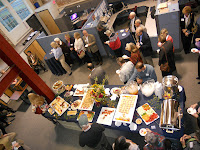 ...and the food!
Posted by Schuylkill River Heritage Area at 11:09 AM