A Few Highlights from the SRT Spree 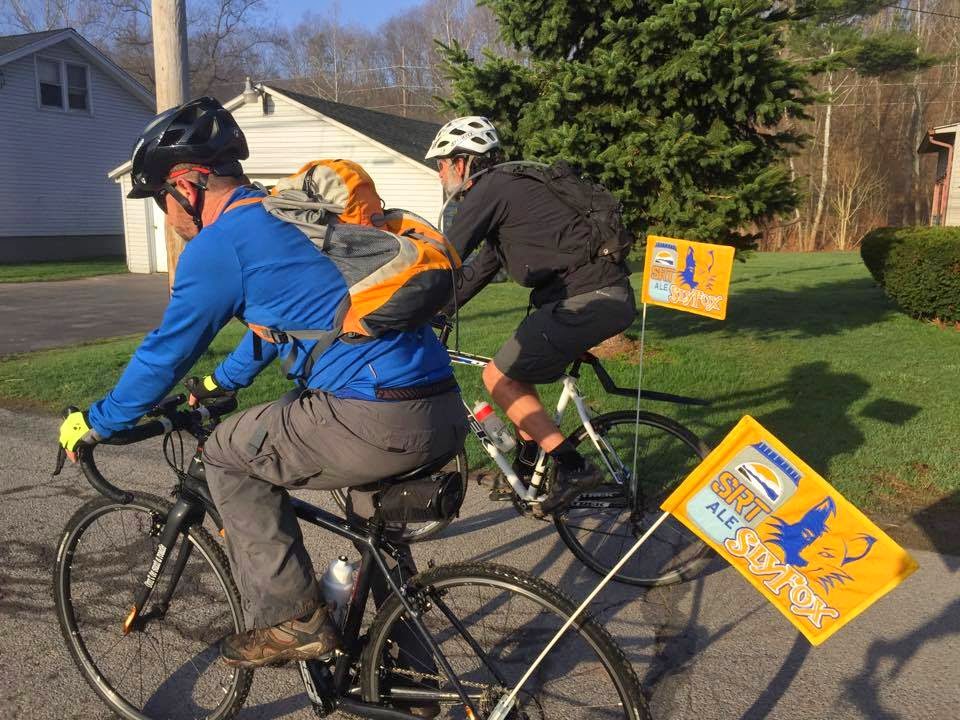 From April 17-22, a two-person team from Sly Fox Brewing Company traveled over 110 miles by bike, kayak, horseback and on foot along the Schuylkill River and Schuylkill River Trail. Dubbed the SRT Spree, their journey helped promote the new Schuylkill River Trail Ale (SRT Ale), while drawing attention to the trail, which stands among the region's most treasured recreational resources. 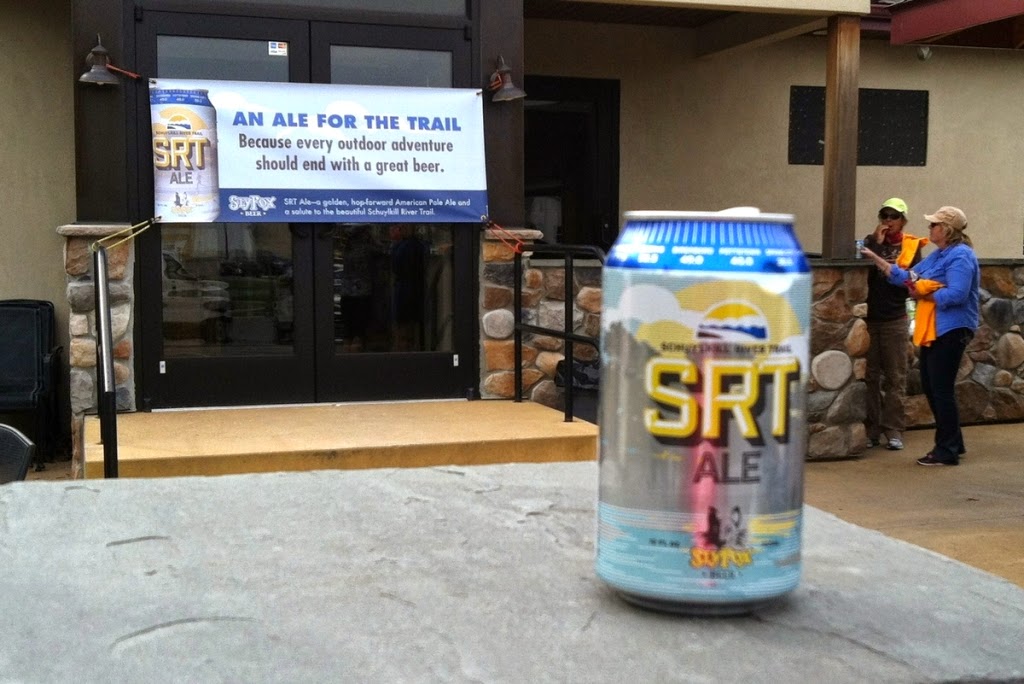 They set off in Schuylkill Haven by kayak on April 17 and pedaled into Philadelphia on Earth Day, April 22, with support from Take it Outdoors Adventures. In between, Sly Fox held two 5K races as well as tastings of the new SRT Ale at 11 different establishments located in trail towns. The Schuylkill River Heritage Area held five trail cleanups, and volunteers got free SRT T-shirts and a voucher to taste the new ale. 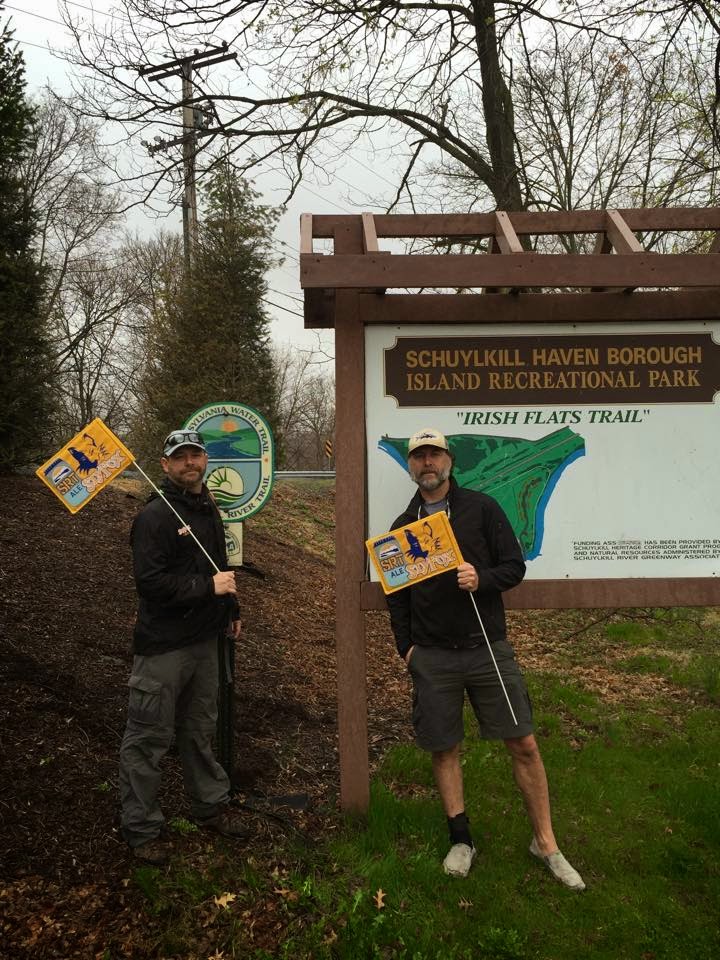 Overall it was a great event, and a fun way to celebrate a new beer that benefits the Schuylkill River Trail through a portion of the proceeds. Here are some highlights from the Spree.

Day 1 Fri. 4/17 (15.5 miles Schuylkill Haven to Port Clinton by kayak): The two-man team--Sly Fox Brewery Sales Manager Corey Reid and Todd Palmer, Creative Director at Virtual Farm Creative--carried flags bearing the SRT Ale image along every leg of their journey. Corey's flag made it all the way to Schuylkill Banks in Philadelphia, while Todd's disappeared off his bike in East Falls. The photo on left shows Corey (left) and Todd at the start in Schuylkill Haven. They celebrated their arrival in Port Clinton at the Port Clinton Hotel.
.

Day 2 Sat. 4/18 (18.3 miles Port Clinton to Muhlenberg Twp by bike & kayak): The pair cycled two miles to the Kernsville Dam Trail Head, where they greeted a team of volunteers who were raking and pruning along the trail. Then, they were joined by about a dozen other paddlers as they kayaked 16.3 miles to Jim Dietrich Park in Muhlenberg Township. 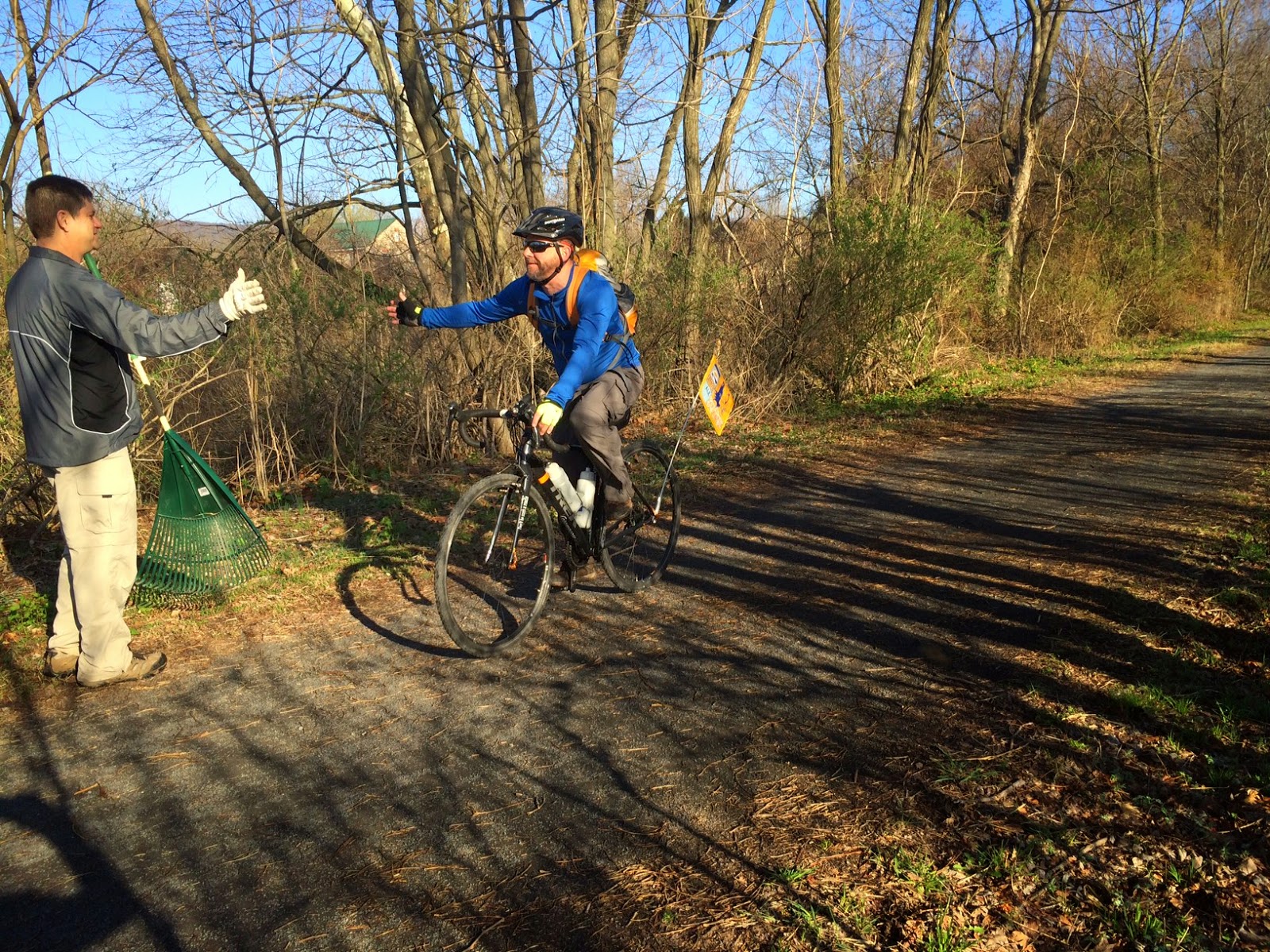 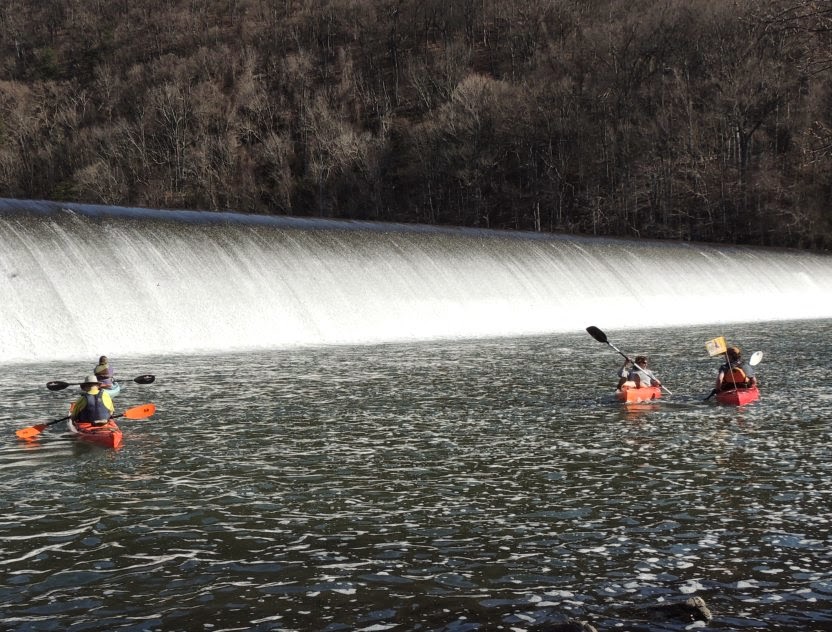 Day 3 Sun. 4/19 (19.6 miles Reading to Pottstown by bike & horse): Following a 9.5 mile ride along the Schuylkill River Trail from Trooper Thorns Pub in Reading to the Unionville Township Trailhead in Birdsboro, Corey and Todd met up with a team of about 30 hardworking volunteers who were assisting with a trail widening project. From there, they hopped on horses and trotted
to Pottstown. 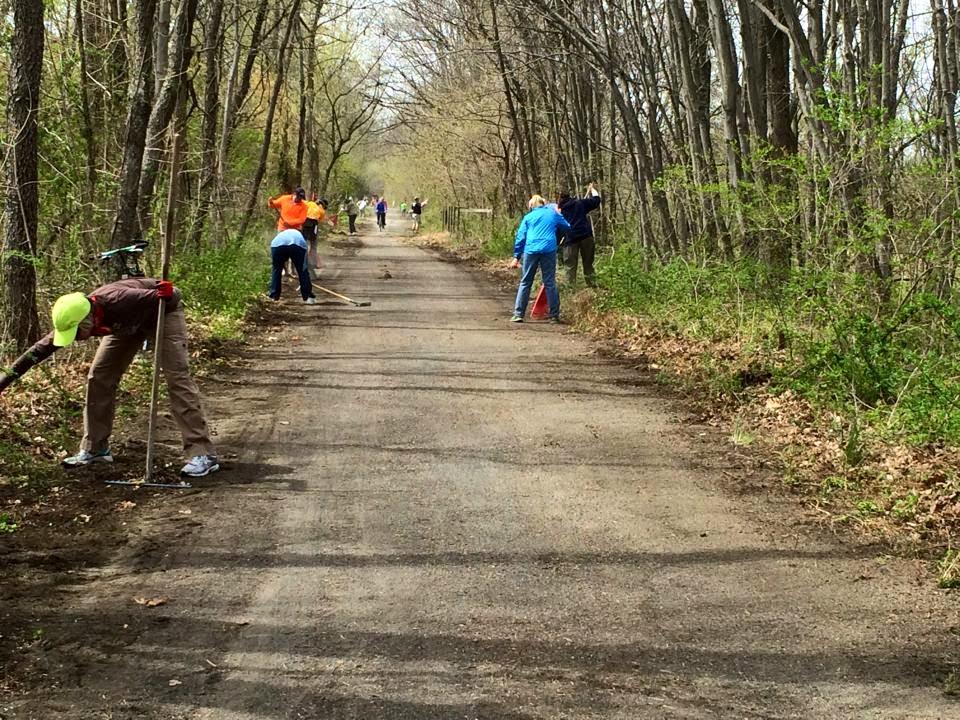 Day 4 Mon. 4/20 (17.8 miles Pottstown to Lock 60 by kayak): Joined by a contingent of kayakers, Todd and Corey got a rainy start to their day at Riverfront Park, stopped for lunch and a tasting at the Railroad Street Bar, and finished the day with sunshine and by locking through Lock 60 of the Schuylkill Canal.  There, 25 volunteers worked to beautify the park with plantings and mulch, while the Sly Fox team biked to a ribbon cutting for a new piece of trail in Phoenixville, then attended an afterparty and a Sly Fox 5K.

Day 5 Tues. 4/21 (23.5 miles Lock 60 to Manayunk by bike and foot): Two Schuylkill River Heritage Area staff member pedaled with the Sly Fox team from Lock 60 in Mont Clare to the Conshohocken Brewery. There, representatives from the two breweries had a good-will exchange of their beer. The day ended in East Falls, with a tasting at the bike-friendly In Rival bar. 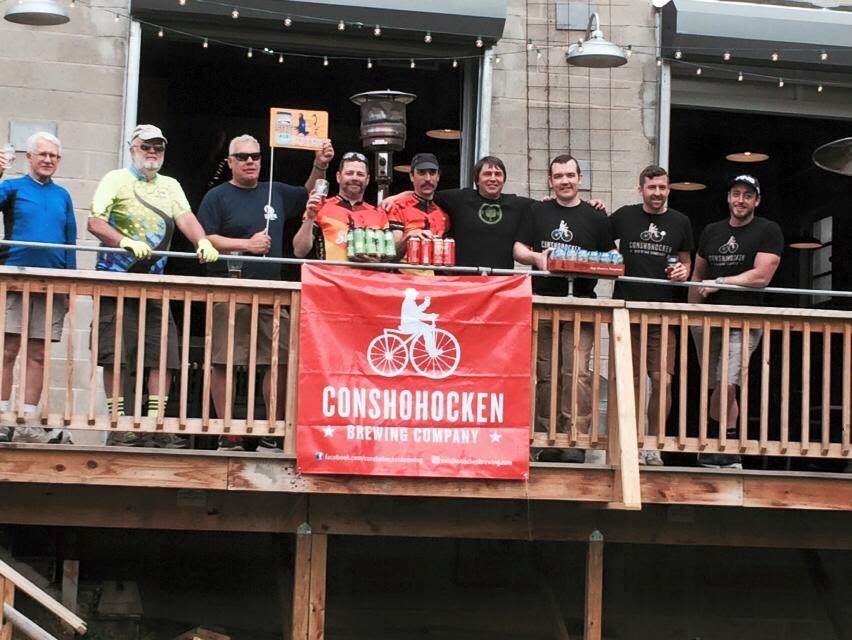 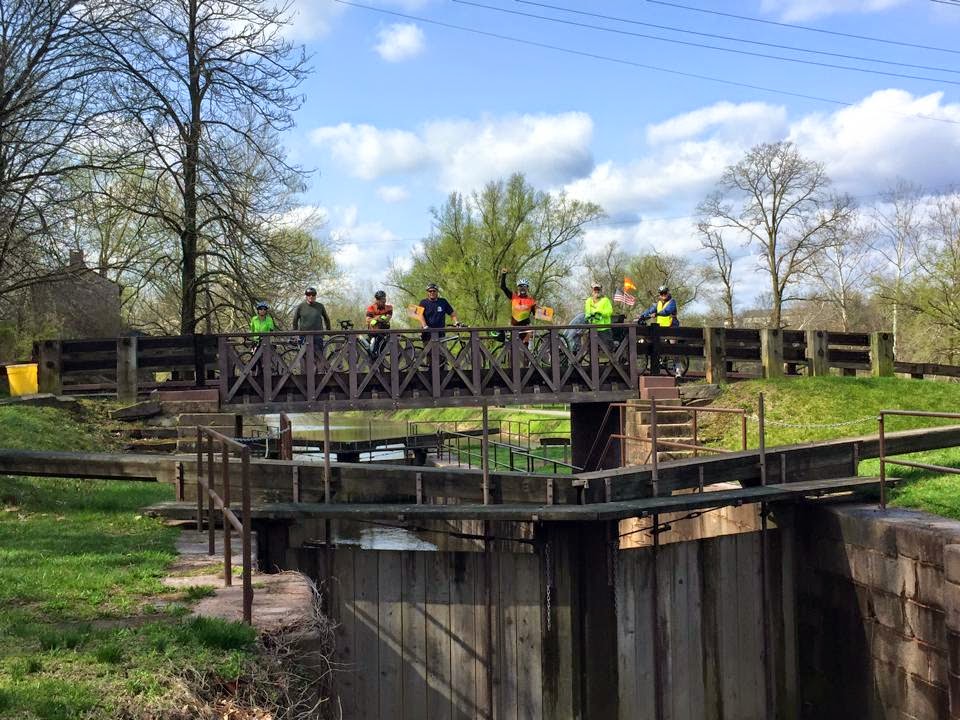 Day 6 Wed. 4/22 (5.5 miles East Falls to Schuylkill Banks by bike): The SRT Spree came to an end at the beautiful Schuylkill Banks in Philadelphia. About 50 volunteers were on hand to pick up trash, rake, mulch, paint and tidy up the trail. Another 5K and park cleanup was held at the nearby Paine Park. Then the SRT Spree finished up with an Earth Day SRT Ale  Release Party at Philadelphia's World Cafe Live. 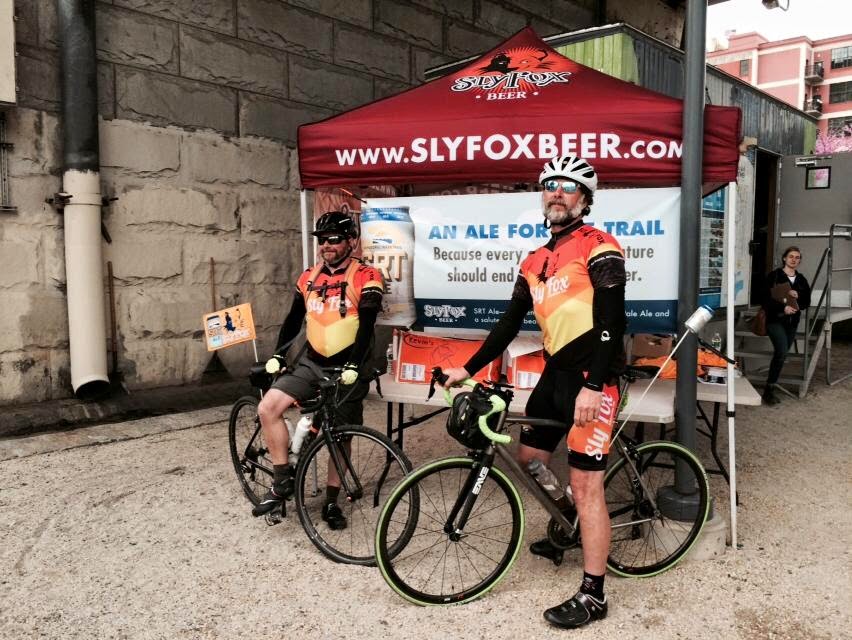 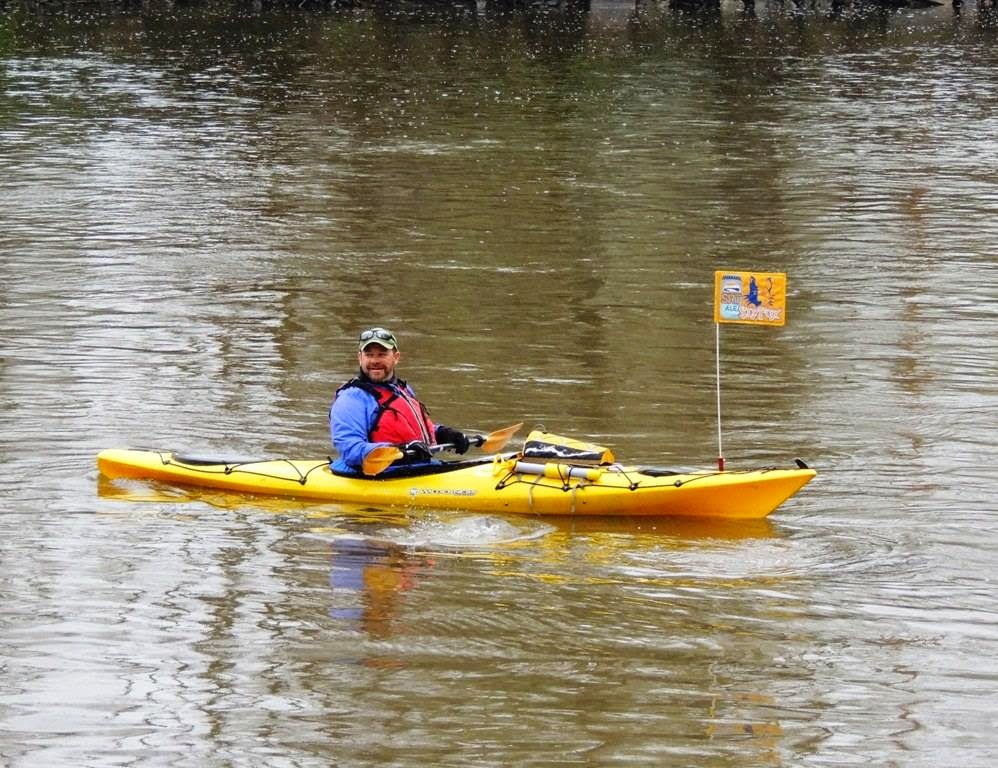 Posted by Schuylkill River Heritage Area at 9:03 AM