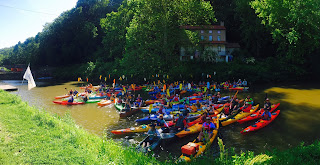 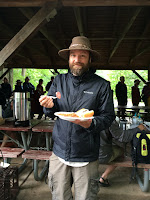 The annual Schuylkill River Sojourn is, hands down, the most popular event we host. Our 18th Sojourn, held from June 4-10, 2016, was no exception. We had a great group of paddlers, a record number (79) of whom made the full 112-mile, week long journey from rural Schuylkill Haven to the urban waters of Philadelphia. For the 2nd consecutive year, we also filled each day with the maximum number of boats on the river (about 100-120). All together, 205 people signed on to do all or part of the trip. Virtually all of them left with a greater appreciation for the river, and a new group of paddling friends. It was an adventure filled week. We were fortunate to be accompanied by Sojourn Steward Bradley Maule. Check out his blog here at phillyskyline.com.

Here are a few of the highlights from the 18th Annual Sojourn:


The fun starts before the sojourn even begins. Sojourners check in at Schuylkill Haven Island Park and many camp out there the evening before the event begins. Once again this year restored steam Locomotive 113 arrived on the tracks behind the park. Campers were invited to climb aboard and learn more about this impressive engine that was fired with anthracite coal.

When120 colorful kayaks hit the water, it's impressive. That's why people line up along bridges and roadsides around Schuylkill Haven to watch and wave--a truly welcome sight for the sojourners. The river along this early part of the trip is windy and narrow, with a very different character than it has in Philadelphia. Luckily, we have great guides and safety boaters who can help out novice paddlers when they get stuck in shallow areas (like me maybe).  Our program theme for the trip celebrated the Centennial of the National Park Service.We were joined on the water by Frank Hays, NPS associate regional director for resources, who gave a brief overview of the NPS Centennial at lunch. After lunch, we headed for the thrill of the day: paddling The Chutes--a bridge abutment that forms a rush of white water. Only four people fell in and, I'm happy to report, I wasn't one of them. The day ended in Port Clinton, where fellow sojourner John Lysaght spoke to a standing room only crowd about his adventures as a thru hiker on the Appalachian Trail. 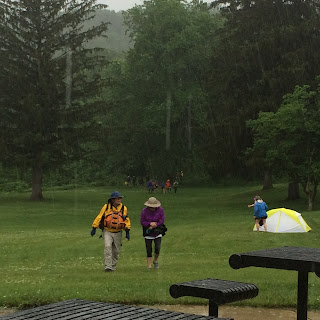 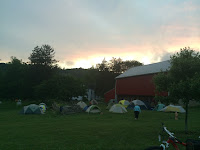 Paddling from Port Clinton to Muhlenberg Township is among the longest sojourn days, totaling 18.5 miles. At the lunch stop, sojourners were happy to kick back and listen to singer, songwriter  Haley Sheeler, whose music has become an annual highlight. Sojourners then paddled to the beautiful Jim Dietrich Park, in Muhlenberg Twp., where a drenching downpour struck just as they were coming off the water. After drying off and eating a delicious Mexican dinner, they set up camp around the park's scenic barn and ended the evening with an informative talk by Independence National Park Ranger Matt Ifill on NPS history. 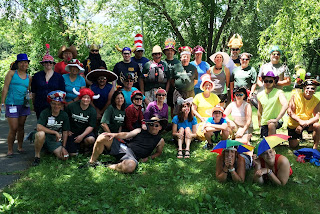 Not all the fun on the sojourn happens on the water. Monday has been designated Crazy Hat Day by the sojourners and each year we have more crazy hats. The sojourners like to wear their hats while navigating Kelly's Rapids, located just outside of reading--one of the most popular river features. At lunch, we heard a presentation on river snorkeling, by snorkeling enthusiast Kieth Williams of Northbay Adventure. The evening campsite, at Allegheny Aqueduct Park, featured a Dutch Oven cooking demonstration by Randy "Splatterdab" Brown. The lemon cake and biscuits he and his wife baked were the perfect end of day snacks. 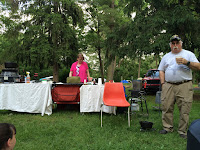 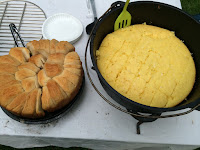 This day is short and sweet--only 13.8 miles, with some striking scenery. The lunch stop is at Historic Morlatton Village, with fried chicken on the menu--a guilty pleasure for the the hard paddling sojourners. While they enjoyed Rita's water ice for dessert, they heard a presentation on the region's iron and steel heritage. The second half of the day went quickly and they arrived at Pottstown's Riverfront Park with plenty of time to shower in our offices before dinner. The evening ended with a band playing music by the river and a selection of short films from Pottstown's In Focus Film Festival.

Unfortunately, we had to forego the annual tradition of locking through the restored Lock 60 because the lock was undergoing repairs. But Wednesday turned out to be an eventful day anyway.  For one thing, a sudden, violent storm overtook the sojourners just after they pulled into a water stop in Linfield. They crammed together for cover under a small pavilion. At lunch they were welcomed at Royersford's Victory Park where they listened to an entertaining talk about Valley Forge National Historical Park by Ranger Bill Troppman. They finished the long 17.8 mile paddle at Lock 60, where they ate a spaghetti dinner and watched a slideshow on the NPS Centennial-themed Philadelphia Flower Show. While they settled in at the park, three of our staff members went to the Union League in Philadelphia where our former Executive Director Kurt Zwikl was honored with a Lifetime Achievement Award from the Preservation Alliance of Greater Philadelphia. Earlier that day, our Executive Director Silas Chamberlin gave the keynote address for the Pennsylvania Statewide Heritage Conference in Lewisburg. 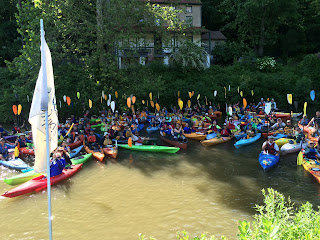 Sojourners paused for a group photo in the canal before their journey to West Conshohocken. Here's what it looked like when the 112 boats launched down the canal: 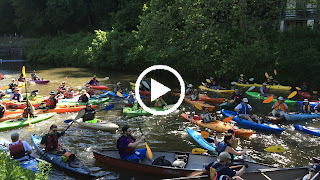 Sojourners stopped at Valley Forge National Historical Park for lunch, where Interim Park Superintendent Patrick Madden spoke about the park's centennial programs.Once again this year, we were accompanied on the water by the fun-loving Norristown Boat Club. In the evening, after a delicious dinner of barbeque ribs and chicken, sojourners heard a talk from our terrific Sojourn Steward Brad Maule, who spent the week photo documenting litter issues, and produced excellent nightly blogs that gave a great recap of each day of the sojourn. Check out his website phillyskyline.comhttp://phillyskyline.com/category/find-the-river/ to read about the sojourn and see his beautiful pictures.


The 17th Annual Schuylkill River Sojourn ended as always at Boathouse Row. Paddlers stopped for lunch at the historic Philadelphia Canoe Club where they got to gaze at some beautiful wooden canoes and hear a presentation from Fairmount Water. Back on the water, they were joined by the Philadelphia Flying Phoenix Dragon Boat Team. 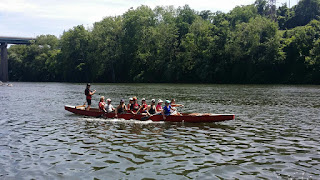 To learn more about the sojourn or to sign up for our email updates visit our website at www.schuylkillriver.org
Posted by Schuylkill River Heritage Area at 12:16 PM 2 comments: